EBRAINS-powered study shortlisted for Science Breakthrough of the year

Each year, editors and writers choose a top research achievement as Science’s Breakthrough of the Year. This year, that honor goes to the multiple COVID-19 vaccines that have succeeded in large human trials. Nine advances from all areas of research were chosen as the runners up. Among them are surprising similarities between brains of mammals and birds, discovered with the innovative microscopy method 3D-PLI, which is powered by EBRAINS services.

Each year, editors and writers choose a top research achievement as Science’s Breakthrough of the Year. This year, that honor goes to the multiple COVID-19 vaccines that have succeeded in large human trials.

Nine advances from all areas of research were chosen as the runners up. Among them are surprising similarities between brains of mammals and birds, discovered with the innovative microscopy method 3D-PLI, which is powered by EBRAINS services. 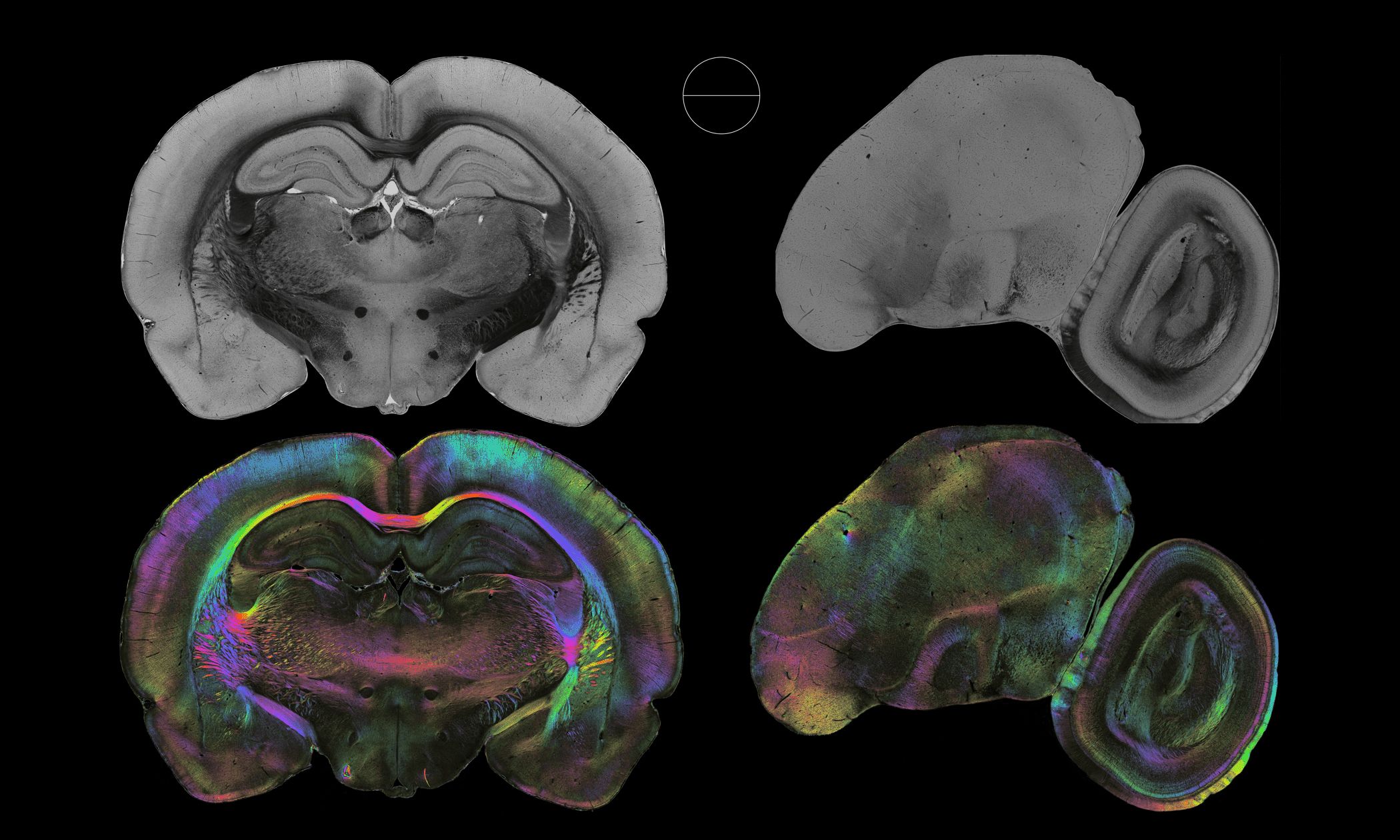 Read the fully story below. The contender list of Science Magazine can be found here.

September 25, 2020 – Some birds can achieve extraordinary cognitive performance – but their brains were considered to be rather disorganized compared to those of mammals. Scientists from Bochum (RUB), Düsseldorf (HHU), Jülich (FZJ), and Aachen (RWTH), for the first time, show striking similarities between the neocortex of mammals and sensory brain areas of birds: Both are wired in horizontal layers and vertical columns. The finding refutes 150-year-old assumptions. Decisive insights were provided by a method developed by Jülich and Düsseldorf brain researchers that runs on EBRAINS’s services for neuroscience.

Birds and mammals have the largest brains relative to their body size. Otherwise they have little in common, so the assumption of scientists for more than hundred years: Mammalian brains have a cerebral cortex that is made up of six horizontal layers and columns that run perpendicular to these layers. The avian brain in contrast appears to be poorly organized at first glance, and only shows accumulations of cells with more or less density.

"In view of the astonishing cognitive performance that birds can achieve, however, it was suspected that their brain is higher organized than previously assumed," says Prof. Dr. Onur Güntürkün, head of the Biopsychology work unit at the Faculty of Psychology at the RUB and an expert on the cognition of birds.

Indeed, researchers around Dr. Christina Herold (C. and O. Vogt Institute for Brain Research, HHU) and Dr. Martin Stacho (RUB) have now succeeded in proving that the brains of birds and mammals look surprisingly similar in their organization. The fibers in the bird brain run horizontally and vertically, just like in the neocortex of mammals. 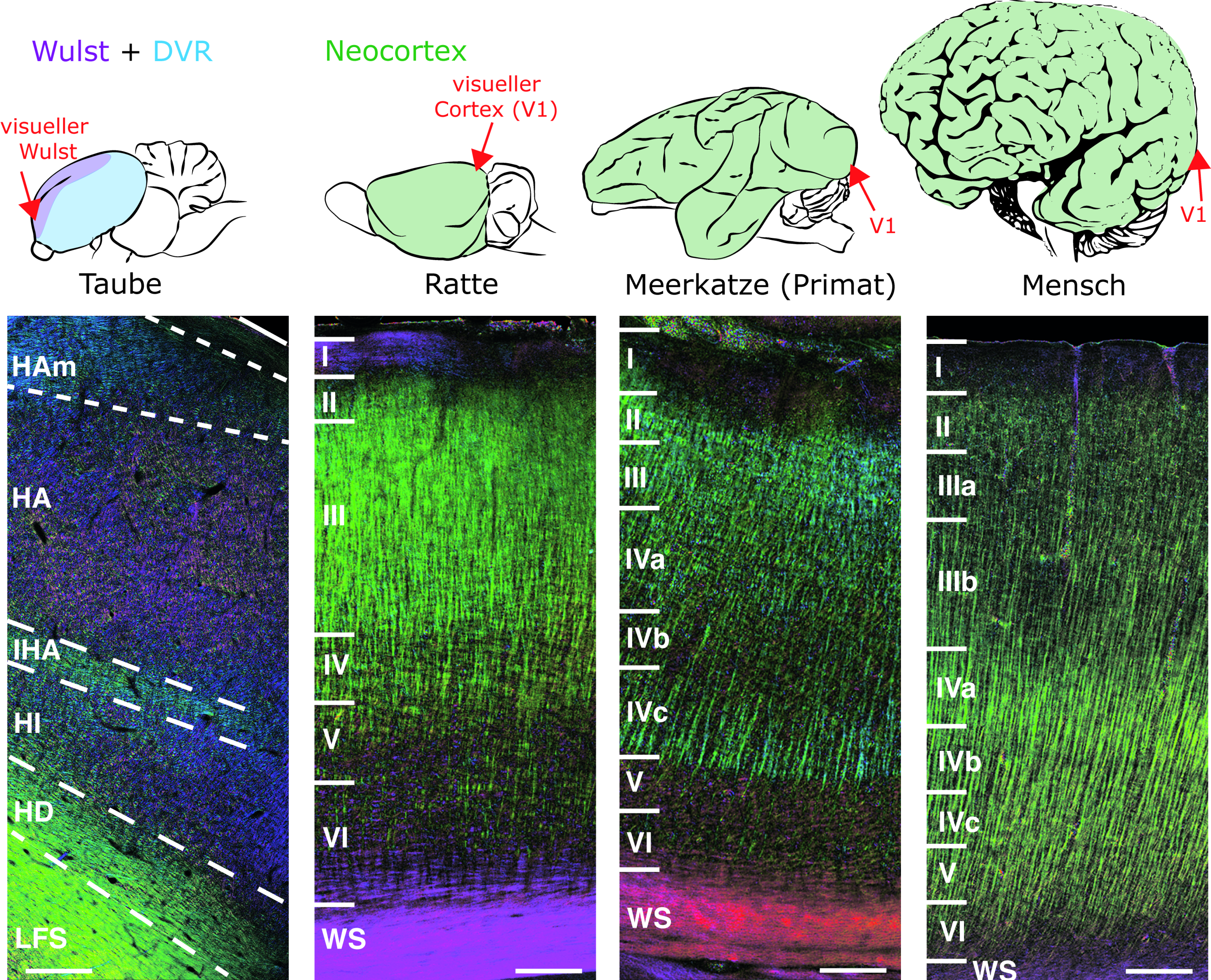 The fiber structure of pigeons and various mammals in comparison. The 3D-PLI method shows the directions of the nerve fibers color-coded. The depictions seen here do not reflect the true sizes - a human brain is about 500 times larger than pigeon brain.

Previously, it was not possible to map the fiber structure of larger areas of the avian brain with the required accuracy. Commonly used techniques are either limited to small tissue samples or lack resolution and sensitivity to reveal microstructural features that define the brain’s neuronal organization. The level in between therefore remained in the dark.

"3D PLI has a slightly lower resolution than tracing methods, but is capable of analyzing large tissue volumes in a reasonable time – a decisive advantage," explains Dr. Markus Axer, head of the fibre architecture group at the Forschungszentrum Jülich. Using this method, the researchers were able to analyze three complete pigeon brains at a resolution of 1.3 micrometers (millionths of a millimeter). Per brain, 250 sections were scanned at high resolution and reconstructed in 3D.

"3D PLI is a technique that contributes significantly to a deeper understanding of the brain’s connectivity and makes it possible to identify similarities and differences in neuronal networks across species," emphasizes Prof. Katrin Amunts, Director of the two institutes in Jülich and Düsseldorf.

Because the method is computationally very challenging, the researchers use the FENIX supercomputing platform, to process the data. FENIX is a European network of High Perfomance Computing Centers that includes Jülich Supercomputing Centre, and is part of the new EBRAINS infrastructure developed by the Human Brain Project. EBRAINS provides neuroscientists worldwide with a set of advanced new methods and resources, including the 3D atlases of the human brain, BigBrain and Julich-Brain, which were created in Jülich and Düsseldorf.

Further tracing experiments in Bochum made it possible to examine the cross-linking of cells in the bird brain in detail. The technique uses tiny crystals that spread into the smallest branches of the nerve cells in brain slices. "Here, similarly, the structure was shown to consist of columns in which signals are transmitted from top to bottom and vice versa, and long fibers running horizontally," explains Onur Güntürkün. However, this structure is only found in the sensory areas of the bird brain. Other areas, such as associative areas, are organized differently.