Release of Julich-Brain Version 2.9 provides users with new insights into the cerebral cortex

The recently released Julich-Brain Version 2.9 is now available online as part of the EBRAINS Multilevel Human Brain Atlas. The new release introduces full coverage of the human cortex, includes 24 additional probabilistic maps of cytoarchitectonic areas, and provides a surface map in the FreeSurfer reference space. With these updated maps come several new features of the online viewer ‘siibra-explorer’, including a pure 3D surface view and a ‘Quick Tour’ for new users.

Julich-Brain (Amunts et al. Science 2020) is a 3-dimensional atlas of probabilistic maps of cortical areas and subcortical nuclei. The microstructurally defined spatial reference system captures the variability of different brains. It offers a powerful tool to help researchers and clinicians to better interpret images of individual brains. Julich-Brain is becoming the basis for a kind of ‘Google maps’ of the human brain as it builds the microstructural foundation of the EBRAINS Multilevel Human Brain Atlas, which integrates neuroanatomical features with complementary maps of the molecular architecture, function and connectivity across multiple scales – from the microscopic scale to the whole brain level. The atlas enables researchers to navigate, analyse and compare neuroscientific data on the basis of anatomical location and constitutes an essential part of the Human Brain Project’s EBRAINS infrastructure.

As a ‘living atlas’ it is constantly being expanded and improved. To this end, the new Version 2.9 of Julich-Brain has now been included into the EBRAINS atlas services to introduce new facets and areas of the human brain. It provides 24 additional probabilistic cytoarchitectonic maps. Julich-Brain Version 2.9 adds to the atlas an expansion of the cerebral cortex with new maps in the frontal and temporal lobes, as well as the insula, and an expansion of subcortical areas with maps of the metathalamus and the bed nucleus.

In addition to the previously known volumetric maps defined in the MNI 152, Colin 27 and BigBrain reference spaces, Julich-Brain is now also available as a surface map in FreeSurfer space, a popular reference space to analyze neuroimaging data. This is supported by a new 3D rendering mode added to EBRAINS’ interactive viewer ‘siibra-explorer’ which offers separate views of the white matter, pial and inflated surfaces.

Fig.1.: Julich-Brain 2.9 represented on the inflated surface of the fsaverage template in EBRAINS’ interactive viewer ‘siibra-explorer’.

A 'Quick Tour' has also been added to the interactive viewer ‘siibra-explorer’ to introduce the core features of the Multilevel Human Brain Atlas via a comprehensive and interactive guide. It starts when opening the browser for the first time and is accessible via the ‘Quickstart’ menu tab at the top right. 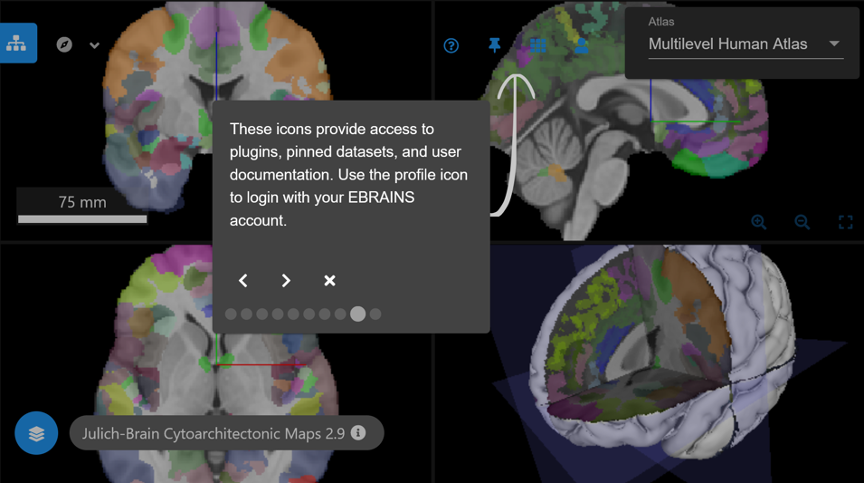 The Julich-Brain Version 2.9 has been developed to better equip users with new tools and insights needed to further their research and to delve even deeper into learning about the fascinating human brain.